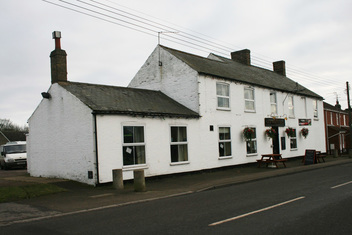 The Old White Bell in Southery, formerly The Silver Fleece
Feltwell is on the edge of the Fens and the Breckland.  Two thousand years ago it would have had beaches, the sea being 180 feet deep between the village and Ely.  For most of those two thousand years the fens proved an impenetrable barrier between the village and its neighbour, Southery.  The land between the two villages is now called the Methwold Severalls, and this story is the true tale of how this area got its name.  During the English Civil War, in the 17th Century,  Charles 1st found himself isolated from his main forces.  He was in Norfolk, a mainly Parliamentary area, and his army was in Oxford.  Charles was helped to get to Snore Hall, near Hilgay, but needed a guide across the wild and dangerous fens to avoid Cromwell’s army.  One of the few people who knew the way was the landlord of The Silver Fleece public house in Southery, Mucky Porter.  Mucky agreed to help, but some of the King’s courtiers distrusted this rather ragged looking fenman. At that Mucky Porter drew from his pocket a grey goose feather. He took out his knife and cut it in half.

“Your lordships”, said Mucky Porter with all the dignity he could muster, “I am a fenlander, a true fenlander. All true folk of this area carry this token and if in need are sworn to help, unto even their own death, another who carries a grey goosefeather.” He put one half feather in his pocket and handed the other to the King. “Now, by my honour, I can do nothing but aid His Majesty.”

This seemed to satisfy everyone and in exchange for a bag of gold, and succeeded in getting the King across safely to Huntingdon.

Twenty years later Charles’ son, Charles 2nd, returned to The Silver Fleece.  He told the elderly landlord that he wanted to reward him further for the service done to his father.  They rode out together onto the newly drained land between Southery and Feltwell and the King offered Mucky as much of the land as he wished.  Mucky specified the borders of his new domain and asked the King, “How many acres do you think I have,  Your Majesty?”  To which Charles replied, “Mr. Porter, I think you must have several acres.”  And since then it has been called the Severalls, and it’s still farmed by a Porter.