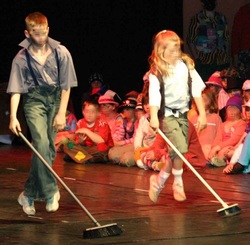 The Broom Dance was performed both on Plough Monday and at other celebrations throughout the year. Sometimes it was competitive. Gordon has seen it at a traveller wedding where the bridegroom and the the bride's father stepped over the broom until one of the men either dropped the broom or gave up through fatigue. We teach the East Anglian broom dance based on the dance performed by Cyril Papworth.